I saw and heard the Trevor Adams screening at Cellular Cinema on October 18th, and am still seeing so much of it. Cellular Cinema, curated by Kevin Obsatz, has been featuring Experimental Film at the Bryant Lake Bowl for a year now, and the Adams show was the first time that it featured the work of one filmmaker.

Adams laboriously hand-scratches, draws and paints over 16mm film, most of which already has other images on it. Some of these images he himself has filmed, others are found footage. He cuts them together to create a vibrating Cultural Anthropology of the inside and outside lives of the community he is in, and of himself. 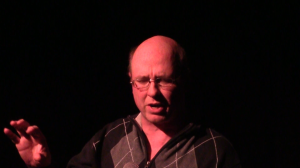 He works on 16mm film, and the whole program was projected from two reels, with an intermission to allow for the reel change. Some soundtrack elements were created in advance from found and recorded sound and music, some played directly from the film projector, other soundtrack sounds and music were created on the spot by audio artist Mike Hallenbeck, a frequent Adams collaborator, from his perch in the high back row of the BLB theater.

Adams’ work of the last five years, separate films, were edited together with film leader countdowns between some of the pieces, but it read as one unified movie, a tour of his life and thought from the last five years, from his home in downtown Minneapolis to the places he visited and the people whose community he shares.

It ended with a trip to Colorado to visit the film lab that processes and prints his films. He took the trip with a friend and Adams’ skeptical conversations with his friend about the lost world of Atlantis play on the audio as the image tours the very real Colorado landscape of craggy rocks and trees. From the non-existent past of Atlantis, Adams’ camera sweeps across the film processing equipment at the Cinema Lab, and his stylus pen scratches the films he will make next as they crazily jump and wind their phantom way through the equipment to final print, if this rare film lab is still around for that.

In Adams’ work you see both the smooth time and particle stillness of film. Film is 24 still pictures every second projected to look like one continuous moving picture, and the films that Adams shot or found languidly reveal the people and landscapes that he encounters and thinks about. He often creates multiple exposures, hand-masking out parts of the frame to create handmade instantaneous edits that sometimes make a point, or a visual pun, or beauty itself.

But then he scratches and draws on the individual frames of film. He animates in a thumbnail-sized space the ghosts, skeletons, spirits and outlines that are within and without the world. He points out elements of death – sketching out the skeleton of a friend walking over a freeway bridge in a landscape of silent traffic honks and danger – and also possibility and hope – rays of light beaming out of the heads of people. He animates scenes on top of scenes, auras and ghosts alive in the deathwalk of zombie office workers in the downtown Minneapolis skyways, but also celebrates the people at a Wisconsin dance by turning them into long-exposure swirls of spirit.

Adams photographs people when they are becoming something else, when they are behind masks and puppets in the May Day Parade, when they are staring at the camera because they are puzzled by his noisy Bolex in an age of silent phone-cameras. He etches out the person, the glow within, always dancing, always jumping up and down with life to counteract the death that photography forces when it freezes the moment.

Adams’ work reveals to us that the photographic image always captures surface and performance, even and especially of people who don’t want to be photographed. It takes his scratched-out field notes to reveal the underlying crazy dance of chance, coincidence and stubbornness that underlies it all.

He also embeds his films with his poetry. He scratches or double exposes words that interact with the image, uses puns and jokes and references that might only carry meaning to certain friends of his. The text, often jumping up and down, revealing itself letter by letter, forces you back into the flat plane of the film image that his drawings and images leave behind in their hypnotic depth. The words prevent you from falling too far, both distance you from the filmic dreamscape and return you deep into your own mind.

Adams’ films are pretty much impossible to describe. They must be seen, or dreamed in the presence of others, but as Adams himself pointed out at the end of the screening, this is a one time thing, a comet brought to you by Cellular Cinema. To see his films on film, with the projector going in and out of focus, with the sound of jumping splices, with Mike Hallenbeck looming over everything splashing our backs with waves of sound, is the only way to experience his mind, his visions, his observations, his amazing fidgeting Cultural Anthopology of sun and air.