MinnAnimate IV was last night and so much great animation work was seen by such an enthusiastic audience! Here’s some images of the Q and A with the animators that followed the screening. 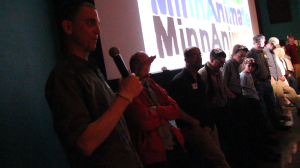 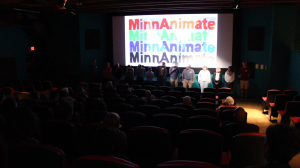 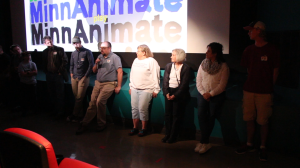 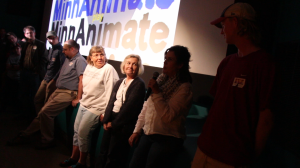 Thanks so Sue Grant for the photo of me!

Here are the people who made some of the films in MinnAnimate IV.

Trevor Adams has been working with 16mm film since 1992, and was recently evicted from his loft so that downtown could make way for more condos.

John Akre is an animator, videomaker and teaching artist who lives in Minneapolis and founded MinnAnimate. http://www.johnakre.com

Kirk Anderson is a political cartoonist, animator, and designer in the Twin Cities.

Brian Barber is a designer, illustrator, animator and motion graphics artist in Duluth MN. His work can be seen in TV commercials, corporate videos, music videos, and strange little projects scattered all around the world.
http://brianbarber.tv
http://brianbarber.com

Greg Bro is an award-winning filmmaker from Minneapolis, MN who writes, voices, and animates comedic short films for his website TheBroShow.com. Bro’s work has screened at various film festival across the country and he is currently working on a project he created for DreamWorks TV. When not tooning, Bro enjoys eating sandwiches and shaving exclamation points into his beard.

After nearly a lifetime of playing with flip books, Susan Brugger discovered computer animation a few years ago and hasn’t looked back. She works primarily in 2d mixed media character animation. She also contributes as a motion graphics artist on the Ray ‘n’ Clovis Show animations created and produced by Theory Animation.

Adam Dargan was raised in Duluth, MN and currently resides in Minneapolis. He enjoys exploring the combination of physical and digital animation. Adam is currently in his final year at MCAD studying a degree in animation.

Lisa Erickson has a history of working and collaborating with other artists from painting and mural work to sumi-e style illustration and stop-motion animation.

Sue Grant is a retired little old lady who can’t seem to get enough animation in her life.

Cable Hardin has been making films and animation for tv, film, and web for decades. He also teaches film and animation at South Dakota State University. Cable has also specialized in makeup special effects for film and tv. Other titles in his filmography include The Uncle Mike Show (2013), Look to the Sea (2010), Beard and Moustache Experiments (2008) and Ancestors (2006).

Edward Heyl was born at a very young age to a group of free-range Minnesotans. He received his BFA from the U of M in 2010 and has dedicated his life to making surreal nonsensery. He currently lives in Northeast Minneapolis with his three cats and human wife.

Robert Jersak is a community college Communication instructor, an audio documentarian and a part-time artist wannabe. These are his first animated films.

David Koesters used to be a JAG officer in the army. He has two cats.

Andy Lefton is a veteran CG animator and VFX artist with over 12 years in the industry. Based out of Minneapolis, Minnesota, Andy has worn many hats, from artist to producer to creative director. Visit his portfolio at http://www.andylefton.com

Keith Mullin is a graduate of Metropolitan State University with a degree in screenwriting. He has been making short films for the last 7 years. This is his first animation.

Beth Peloff is an animator and documentary filmmaker and editor. Her animations have played in film festivals locally and nationally.

Tom Schroeder has been making generally hand-drawn animated films since 1990.

Leo Winstead is an illustrator and filmmaker based out of the Twin Cities. Leo has been involved with various film projects over the last 20 years. Live-action projects have included work on “The Quiet Storm” (2000) and “This Is My Body” (2008). Recent animated films include “Akello & the Lion” (2010) and “Aurora” (2013).

The Phoenix by Moira and Bruise – IFP Stop Motion Camp 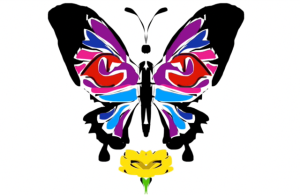 We asked a class of community college students to give us a metaphor for starting college. In this animated short from the series Dreaming by Degrees, Christy, a recovered substance user, talks about the fight between good and evil … and the hope of new beginnings.

Egghood is an animated short that follows an egg from birth to high school graduation. “It’s like Boyhood. But it’s 30 seconds long.
And it’s about an egg.”

We asked a class of community college students to give us a metaphor for starting college. In this animated short from the series Dreaming by Degrees, Darvin, an ex-gang member and returning Iraq War veteran, talks about spreading his wings and trying to soar. 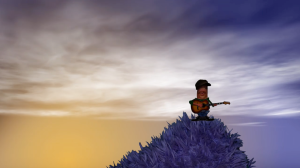 Music video for the Duluth Homegrown Music Festival, 2015. Participants are assigned a random song and make a video for it.

In this comedic short written, animated and voiced by Greg Bro, Noah builds a big ass boat to save the world’s animals from a watery grave, but soon learns he may have overlooked some things. 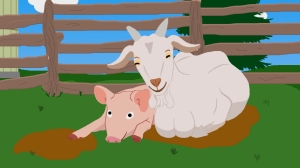 Happiness on the farm. Who’s to say? 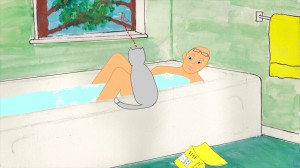 A miscalculation causes this tomcat to lose a couple of his nine lives. This animation incorporates watercolor backgrounds with hand-drawn Adobe Flash animation.

Snibb, a stranded and lonely character, but not by choice. He has been marooned on a desolate and barren planet where he struggles to utilize his weak and failing satellite link to attempt daily distress beacons for rescue. Through fate, he may have a way out.

Hansel and Gretel Go to the Birds

“Eurytus” is a retelling of the ancient Greek myth of the battle between the Lapiths and the Centaurs. I used the technique of animating clay in high relief as an homage to the carved marble metopes found on the Parthenon.

An animator’s model comes to life and explores his new world. He discovers music, love, loss and hope.

My Friend the Trees

My friend Devin died and became three trees that will one day grow together into one.

Amp Up! at American Swedish Institute / An animation of iPad Drawings created by Lisa Rydin Erickson. These are poetic interpretations of Hagstrom Guitars shown at Amp It Up June 20 to October 25, 2015. Music by Drew Rydin Erickson and Production by Ryan Murphy copyright 2015

A man plunges into a frantic, surreal panic when a creature calls for help. Created in 9 days for MinneAnimate IV, it captures the emotions involved in its creation.

Searching For An Autobiography

Smile is a stop motion animated film about a man’s search for happiness and how society’s conventions challenge his experiences.

Tongue in cheek view of the industrial process used to make the most common soup of the day, tomato bisque.

Thugs the Musical: Drive-By is an animated musical comedy about a drive-by shooting.

Get In The Car 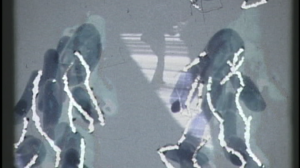 Through a purgatorial Twenty Eleven

Channelling the ‘news’ from from downtown filmic ruins, ruminating on ‘the state i am in’.
Look for the Shmitt music wall and watch out for subliminals of oil derrig xenomorphs line dance to the song of the bouncing wire.Falling upwards and flying underground to the beats of the radio birdman… 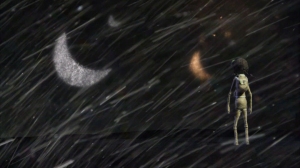 A lone pilot is faced with isolation on a cold dark world.

Here is the trailer for MinnAnimate IV. The animation was created by students in IFP-MN’s Photoshop/Flash Animation camp last week: