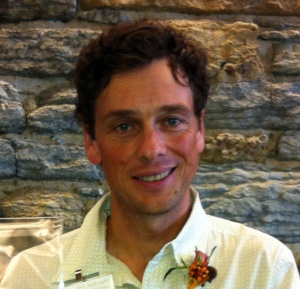 Tell us a little bit about yourself and your animation.

I have been making hand-drawn animated films since 1990.  My films have been broadcast on Independent Lens, the Sundance Channel, Canal + France and Spain, SBS in Australia and CBC in Canada and have screened at the American Cinematique in Los Angeles and Anthology Film Archives in New York.  The films have also played widely on the international festival circuit, including at Annecy, Rotterdam, Sundance, Ottawa, South by Southwest and Edinburgh, and have won over thirty festival awards.  I received Minnesota State Arts Board Grants in 1991, 1999 and 2006, Jerome Film and Video Grants in 2000 and 2004, McKnight Fellowships in 2006 and 2011, Bush Fellowships in 1997 and 2008 and a Rooftop Filmmakers Grant in 2013.  I have directed commercials for Kashi, Samsung and Hertz Car Rental and am currently represented as a director by Global Mechanic, Vancouver, Canada.

Animation attracted me initially because it demands multi-disciplinary thinking. My educational background is in literature, so I first approach a film as a narrative form.  With a couple of exceptions my films are adaptations of short stories.  The stories are, of course, communicated through the language of film, translated into visual staging and sound design.  And because the films are conceived and executed one frame at a time, one really gets to explore the expressive relationship between the style of the animation and the content of the story.

Tell us about your short in this year’s festival.

Marcel is a rooster who belongs to a friend, Ann Berckmoes, in Tervuren, a suburb of Brussels, Belgium. During a bird flu scare in Europe a few years ago, the provincial government issued a requirement that domestically kept fowl be killed.  Ann initially tried to put Marcel to sleep with increasingly large doses of sedatives in his food, but every morning he was in his tree at dawn, vigorously calling out “cuculurucoo!”  She failed in multiple timid attempts to kill Marcel, the order was lifted and she celebrated by obtaining three chickens for Marcel.  He had a son who, when he grew, became territorial and fought his father.  Marcel was blinded in one eye and fled his kingdom.  He returned eventually, fought and killed his son to regain his territory.  Most recently, he survived an attack by a fox.  Marcel simply refuses to die.

During May of 2011 Ann visited my wife and me in St. Paul and I took the opportunity to record her telling Marcel’s story. She recorded the story in English, Dutch and French.   I licensed a piece of music composed by Phil Kline and recorded by the string quartet Ethel.  After editing the different language versions of the story to the music, as I’ve done with my other “documentary” animation projects (for example “Bike Race”), I then analyzed the audio track frame by frame and drew to this structure. Technically, it’s the first film I drew directly into the computer with a Cintiq, a computer screen upon which one can draw with a stylus.  And, somewhat ironically, the loose, painterly style of the film developed from working digitally rather than drawing on paper.  The animation was about half rotoscoping from live action footage I shot and half traditional character animation.

As for the abstract transitional sections, these came about as a formal expression of the main theme of the film.  When I initially heard Ann telling Marcel’s story, I though “ah, Greek tragedy enacted by Belgian roosters,” but I also remembered a line from Camus’ essay on Sisyphus.  I’m paraphrasing now, but it’s something to the effect “There is no fate that cannot be overcome by scorn.”  I wanted to give Marcel this willful defiance, but I also wanted to find a visual equivalent to his dilemma.  And so, as Marcel fights to stay alive, his representation in the film struggles to fight against the forms breaking into an abstraction of line and color.  Form and abstraction, life and death, matter and energy, etc.  I’ve always felt that the most successful animated films have an awareness of the relationship between the technical aspects of the production and the narrative content.

Do you do other kinds of art that inform your animation work?

I play and record music and that has led to doing the sound design for my films myself.  It’s pretty fun after working many long months on the animation for the film, at a point when the material has become a little bit dead to you, to bring it to life again with the sound.
Who are some of your favorite/inspirational animators?
Initially, Norman McClaren, Caroline Leaf and the Brothers Quay.  Recently, I’ve been really impressed by films from Daniel Sousa, Amanda Forbis and Wendy Tilby, Rosto and Jeremy Clapin.
Is Minnesota a good place to do animation? And what do we need here to make it a better place for animation?

I’ve lived in Minneapolis for 25 years or so and it’s been great for me.  Lots of arts grants available, relatively cheap to live.  Between Mn Film Arts, the festivals, the Walker Art Center, the Trylon, Landmark Cinema there are plenty of opportunities to see good independent/world films projected large in the dark.  I’ve been able to support myself through a combination of teaching and commercial work.  It’s worked well for me as an independent animator.  Obviously, if you want to work in mainstream television or movies, you probably don’t want to stay in Minneapolis.